As a Violin teacher specializing in young beginners, I have seen first hand the difference music can make in a child’s life. It is not just a vehicle for expression. Learning to play a musical instrument increases attention span and academic performance.

Roy P. Martin, a researcher for the College Of Education at the University Of Georgia, recently found that there is a commonality of skills necessary to both play an instrument and succeed academically. Himself a Violinist, Martin points out that playing an instrument also increases self esteem and fosters social skills, providing a much-needed mentor relationship between teacher and student.

Special Needs children in particular benefit greatly from music lessons. Some are even prewired for it. 40% of kids on an autistic spectrum have perfect or relative pitch, twice the level of the general population.

Over the years, I have had several Special Needs students, but there are two that provide a perfect example of how music can increase concentration and aid in the development of fine motor skills.

One of my students had a mild neurological disorder, which made gripping things with his right hand a challenge. Over the course of a few months, he was able to hold the bow steadily, and his new found strength translated into better penmanship and increased coordination. At Congregation Beth Elohim in Brooklyn, one of my students had ADHD After four months of Violin lessons, her attention span increased exponentially, but her parents pulled her from the Violin program citing a scheduling conflict with soccer. Two weeks later, I got a call from my student’s Elementary School Principal, who lamented to me that her attention span and academic performance had gone down when our lessons stopped. At the Principal’s urging, her parents re-enrolled her as a private student, and her overall performance at school improved once again. 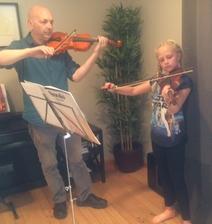 I learned something from this last experience. Organized sports are fun, but in the end your body can only play soccer for so long. Music, on the other hand, is a lifelong friend. If you master an instrument early in life, you can always return to it later on.

Intellectual patience and perseverance are skills that American schoolchildren will need for their entire academic career, ones that can help bridge the gap between cultures which are currently outperforming us. In the U.S., when children were presented with an impossible math problem. they struggled for only five minutes before they gave up. In Japan, they lasted an hour.

Learning how to play the Violin requires a student to absorb something very complicated in incremental stages, breaking down a large task into smaller ones.

At it’s core, music teaches children how to delay gratification and struggle through difficulty. Kids who feel like they can do something as challenging as playing the Violin will be able to break down any large intellectual task into smaller increments, which will in turn build confidence for the future.

“We just started homeschooling, and I think it might be a mistake.”BLOG, Parents Recommend