The Unintended Consequences of Law-making

Last summer, a group of California residents involved in various ways in homeschooling noticed with alarm that state legislators were planning to tinker with a little-noticed part of the education code called Independent Study (IS).

Little-noticed before the pandemic, that is.

Once we’d gone through the big pause and schools started to reopen, administrators noticed something alarming: some families liked home learning. They realized how little time in school was spent on actual study, how much more time they had to pursue their passions, and in many cases, how much better the child’s physical and mental health was.

In other words, these families found out that they were actually homeschoolers.

The state found this distressing, however, and was moving to curtail it. They tightened the rules concerning IS, requiring homeschool programs to have “daily instruction,” for example. They also tightened the already stranglingly tight rules for online charter schools.

What they didn’t know (but should have, since we kicked up as big a fuss as we could) was that IS is used not just by families trying to keep their kids from going back to a physical school during Covid. IS is used to serve the needs of a diverse set of students, from kids learning many grades ahead to kids with severe physical and mental illness.

And here we are five months later, with another round of changes to ed law on the horizon. And again, here we homeschoolers are, kickin’ up as big a fuss as we can.

Following you can read my letter regarding how the unintended consequences of their ed law changes have affected my particular profession. But I can assure you, this tale is just a small part of the larger picture. These “small changes” they made have wreaked havoc with home educators, and are pushing homeschoolers out of the public school system.

I am writing because I think it is extremely important for legislators to be aware of the unintended consequences of changes they make to law, in this case, education law. The experiences I will detail below concern the changes to Independent Study (IS) that were enacted in 2021 under AB 130 and 167. I feel this is very important for you to read through before the vote on further changes to the ed code next week.

In August 2021, when these changes were being debated, a group of Santa Cruz-based public homeschooling/IS educators met with State Senator John Laird to discuss their concerns over the proposals. Though I was kept from attending by one of our famous Santa Cruz traffic snarls, my colleagues did a great job of explaining to Sen. Laird how public school-enrolled homeschoolers use Independent Study to serve the needs of vulnerable students.

It is now five months later, and as predicted by those of us who met with Sen. Laird, these changes have had a devastating effect on our families and teachers. I will let our local public homeschool program advocates speak for themselves; this letter concerns the online private school I teach for, Athena’s Advanced Academy.

First, a short introduction: Athena’s attracts a variety of students, both in school and homeschooled. Our core population is gifted children who are homeschooling, many of them through public charters using IS. These families choose homeschooling for a variety of reasons:

Our courses take place fully online. We do not use video, and students are asked not to divulge their full names, ages, or other significant details. They are never physically in a room with the teacher or other students. All of our sessions are recorded. Athena’s conducts thorough background checks on all instructors. As you can see, the risk of attending courses at Athena’s is practically nonexistent.

Before I go into the details, here are just a few results of the changes you enacted in August:

Just from those four bullet points, you can see how disruptive the law has been to our school. You could certainly stop reading here and be fully aware that the changes you made were harmful to a very vulnerable population, but I hope that you will read on so that you can fully understand our situation.

When this saga started, Dr. Stein was faced with a number of issues stemming from the law’s requirement that our instructors be fingerprinted.

At that point, each individual instructor’s arduous task started. Please note that instructors make between $100 and $200 per student per course, and so far only one of us has kept our expenses under $100! Many of us teach part-time while homeschooling our own children, so clearly, the cost is prohibitive to us. But the cost has been dwarfed by the time trying to figure out the US’s labyrinthine system of education, privacy, and interstate communication. It’s truly been a disaster!

The intent of the law, I assume, was to better and more safely educate our students. Our students are not safer because of this law. They will not be better educated. Their parents will not feel more comfortable with their choice of Athena’s as an educational provider. This law has done nothing but force us into a Kafkaesque tragicomedy which keeps us from doing what we love: educating our unusual, smart, inquisitive, creative, and vulnerable students in our shared passions.

Here is a sampling of students who are in my courses:

Our students deserve a school like Athena’s. Independent Study allows them to maintain their status as public school students while also pursuing an education that suits their needs. Like Dr. Stein, both of my children were public school students the entire time they homeschooled. One of them just graduated with honors from UC. We are not the fringe-dwelling crackpots portrayed in the press.

From our point of view, the crux of this situation is that lawmakers view homeschool educators with suspicion. Public homeschool programs that use Independent Study, a lifeline for our families, are seen as bilking the government out of money needed to educate children in mainstream schools. There is no acknowledgement that our public schools have become unable to educate a significant portion of the population due to narrowing of the curriculum, draconian attendance rules, and lack of accountability when a child is harassed or bullied.

Athena’s is a wonderful place. Our students love the community and the sense of belonging that they get in a place where they aren’t seen as different and where their academic needs are met. Many of our families scrape together the money they need to pay for our classes, but the lucky ones are able to enroll in public programs that pay their tuition.

I realize that the legislators making these changes thought they were solving problems. I also know, however, that they were not unaware of the vulnerable children whose education they were going to upend in making these changes. My two colleagues who met with Sen. Laird made sure that he understood the consequences and I sent him a letter detailing my separate concerns after the meeting.

I urge you to consider that in order to make good laws that help our state’s children become educated citizens, you have to consider all of our children. Yes, the majority of our children do just fine in mainstream schools, but our vulnerable children do not. Many need Independent Study to serve their needs. Our society needs them not to fall through the cracks, and it is in the State’s best interests to keep them in the public school system.

My own children are now grown, but if they were homeschoolers now, we would have left the system. And we wouldn’t be alone. The enrollment numbers speak loud and clear: decisions like the ones you made last August are having terrible consequences for our students. The students you are losing from the system now are probably not coming back, and that is a sorrow that all of us at Athena’s feel acutely.

Thank you for sticking with me through this letter. I would welcome any questions you have. You may also contact Dr. Stein to get her perspective. 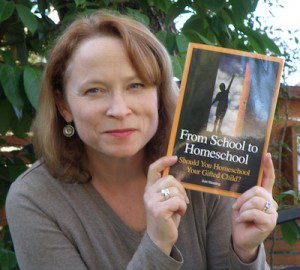 My first great writing accomplishment was in the third grade, when I wrote a novel on purple notebook paper and turned it in for extra credit. Since then, I attended Stanford University and the University of Michigan, where I received an MFA in Creative Writing and won the Hopwood Award for short fiction.

I wrote my second novel, which I also turned in for extra credit.

When I became a parent, my work changed to match my life, focusing on journalism about parenting, gifted education, and homeschooling; fiction for children; and teaching writing and literature to homeschooled kids.

My parenting and education journalism stems from a belief that our modern “village” is creating a new form of informed parenting, and that we are all better parents when we join together.

Other pursuits: Besides writing, I am a teacher and a musician. I teach online at Athena’s Advanced Academy and in person. I love to cook, cuddle with my cats, and enjoy nature and fine food with my husband and grown children.

What’s with the name? My paternal grandfather served in Japan during WWII and fell in love with it, returning after the war to open a store there. My parents named me Susana, and he suggested Suki as a nickname. I respond to either.

Help Needed for a Righteous CauseBLOG