The “Ramayana!” is an annual event in which the entire student body takes part. This magical theatrical production of drama, dance and song has been entertaining audiences for more than 40 years. In the preschool years students may begin by taking part in the ever-popular forest animal scene. Gradually they work their way through various small parts as dancers, singers, monkeys, demons, and martial artists until they finally emerge in the lead roles in their high school years. Behind the scenes, a large supporting cast of parents, teachers, alumni and Mount Madonna Center staff take on the roles of prop makers, costumers, makeup artists, technicians, musicians, stage crew, and concessionaires. This makes the Ramayana! our largest school event of the year. 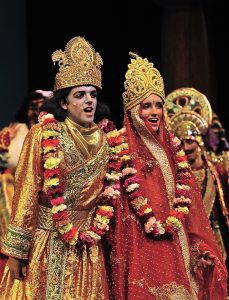 The Ramayana is an ancient Sanskrit epic which follows Prince Rama’s quest to rescue his beloved wife Sita from the clutches of Ravana with the help of an army of monkeys. It is traditionally attributed to the authorship of the sage Valmiki and dated to around 500 BCE to 100 BCE.

The Ramayana teaches us that not only is it possible, but it is also necessary to ensure victory over evil forces. Lord Ram is the epitome of kindness, compassion, and love. His wisdom and patience made it possible for him to follow his inner good without worrying about the loss of luxuries and kingship.

Quick guide to the Ramayana from The British Library

The Ramayana is an ancient Sanskrit epic which follows Prince Rama’s quest to rescue his beloved wife Sita from the clutches of Ravana with the help of an army of monkeys. It is traditionally attributed to the authorship of the sage Valmiki and dated to around 500 BCE to 100 BCE.

Comprising 24,000 verses in seven cantos, the epic contains the teachings of the very ancient Hindu sages. One of the most important literary works of ancient India, it has greatly influenced art and culture in the Indian subcontinent and South East Asia, with versions of the story also appearing in the Buddhist canon from a very early date. The story of Rama has constantly been retold in poetic and dramatic versions by some of India’s greatest writers and also in narrative sculptures on temple walls. It is one of the staples of later dramatic traditions, re-enacted in dance-dramas, village theatre, shadow-puppet theatre and the annual Ram-lila (Rama-play).

The original five books of an oral epic of local northern significance dealing with a hero and his exile, the abduction of his wife by a rival king and her rescue became conflated into seven books in which the hero Rama became an avatar of the god Vishnu, the scene shifted to encompass the whole of India, and the struggle to recover his wife became a metaphor for the final triumph of the righteous.

A brief summary of the Ramayana

Rama, prince of Ayodhya, won the hand of the beautiful princess Sita (seen here), but was exiled with her and his brother Laksmana for 14 years through the plotting of his stepmother. In the forest Sita was abducted by Ravana, and Rama gathered an army of monkeys and bears to search for her. The allies attacked Lanka, killed Ravana, and rescued Sita. In order to prove her chastity, Sita entered fire, but was vindicated by the gods and restored to her husband. After the couple’s triumphant return to Ayodhya, Rama’s righteous rule (Ram-raj) inaugurated a golden age for all mankind.”

Continue to learn more about the characters > > >

The British Library is the source of the above information: https://www.bl.uk/

How to watch the total lunar eclipse on May 15Entertainment